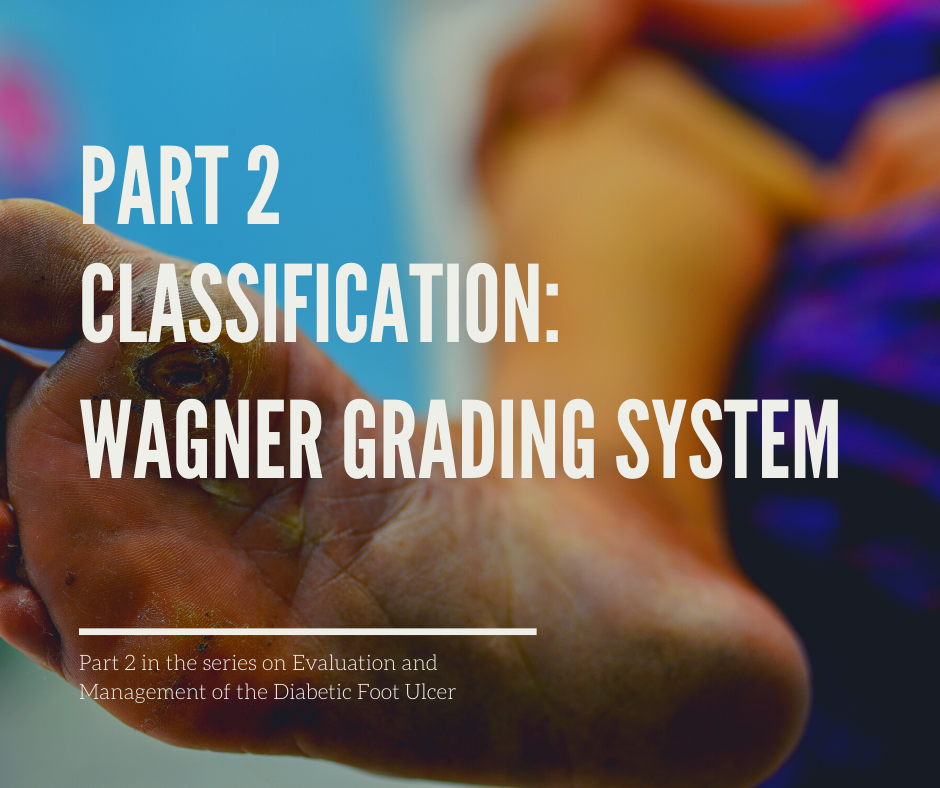 There are many scales that attempt to classify diabetic foot ulcers, but few have been validated and none have demonstarated prognistic reliabilty or accuracy with regard to healing a DFU. Some scales focus on anatomy (depth of ulcer), some include vasular assessment, and others include the presence or absence of infection.

Each scale has its strengths and weaknesses, trading ease of use for clinically relevant categories for decision-making. Additionally, it is often unclear if the classification scale was developed for research, audit, or clinical care.

In this series, we'll look at the most commonly used classification scales currently in use to classify diabetic foot ulcers, including:

Wagner created his eponymous grading system in 1981 in conjunction with Bernard Meggitt through observation of the progress of wounds from callus to ulcer, abcess, gangrene, and finally surgical ablation. The system uses 6 grades from 0 - 5 based on the depth of the skin lesion and the absence or presence of infection. Wagner has been critized for ignoring vascular status in his grading system, but many useres of the Wagner grade are unaware that Wagner's treatment algorithms incorporated vascular assessment using ABI to determine the management of the DFU. In fact, he spends 12 of 16 pages of his original manuscript describing the evaluation and management of vascular disease as a key component of treatment of the dysvascular foot. Despite this, the fact that there is no inclusion of PAD in the actual grading system means most DFUs are clinically classified into Wagner Grade 2 or 3 ulcers, which is insufficiently precise to separate most lesions.

In hyperbaric medicine, however, Wagner's grading system is the only one that has been used in clinical research and has been incorporated into the requirements for reimbursement. This leaves the clinician with no other choice at this time. The unintended consequence of linking reimbursement for HBO2 with the Wagner scale is the application of the Wagner Grade 3 grade to wounds in order to qualify a patient for HBO2 versus using the Wagner Grade 3 in accordance with the original Wagner management algorithm. For instance, CMS lists a Wagner Grade 3 ulcer as a requirement to receive HBO2 only when the wound has failed to respond to 30 days of conservative therapy. According to the definition of a Wagner 3 ulcer, this could be a patient with an ulcer that has been present for over 30 days and has radiographically documented osteomyelitis of a phalanx or metatarsal head, or a fluctuant, acutely infected foot needing acute surgical intervention. While both conditions hae been shown to respond to HBO2, they are different clinical entities that are not adequately represented by Wagner's grading system or original description. Wagner wrote that the Grade 3 foot almost always had more deep infection than was apparent from external examination, and careful dissection of ray and midfoot amputations was required to ensure there was no diseased or necrotic tissue left behind.

Black Friday Sale Is Open! (save on all wound care courses)

Q & A: What are your recommendations for staff education and management of hyperbaric medicine in my clinic?

Video Lesson: The Explosion of Chronic Wounds in the U.S.

The Business of Wound Care and Hyperbaric Medicine