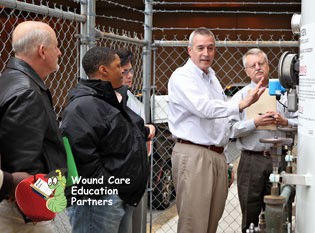 This article will provide you with some background on liquid oxygen, which is the most common form of bulk storage for this gas. The manufacture, storage, basic design of a liquid oxygen converter, and general safety practices will be covered. Again, keep in mind that working around oxygen has its hazards, but working around a liquid oxygen system can be outright deadly if you have not been properly trained.

Liquid oxygen systems are not as labor intensive as a bottled gas system, since the liquid converters are serviced and maintained by the 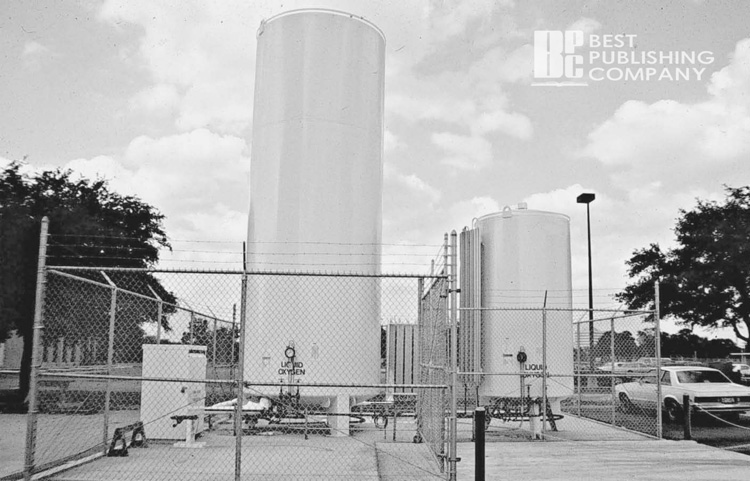 Hospital liquid oxygen converter with backup convertersupplier. It is very rare that someone working in hyperbaric medicine will come in direct contact with the converter. There are two exceptions.One is the individual who is working with a hyperbaric chamber that is located some distance away from the hospital and has a dedicated converter. Another exception would be someone working in a hyperbaric facility where a small oxygen converter (known as a Dewier) is brought into the building to supply breathing gas for the chamber.

If you are working directly with a liquid oxygen converter, you need to become very familiar with how the system operates and how to work safely around liquid oxygen. First, read the MSDS on liquid oxygen, paying special attention to fire and explosion data and the reactivity to other chemicals. Keeping in mind, that oxygen, in liquid form, is very hazardous due to the extremely cold temperature of liquid and can react violently when it comes in contact with hydrocarbons (i.e. oil or grease.) Second, receive hands-on training from the supplier (or a trainer who has been trained by the supplier) on how your system works and what you are allowed to do to operate the equipment. Third, never assume anything. If you are experiencing a problem with equipment that is outside of your normal operational procedures, call the supplier for help.

When air is compressed and cooled and compressed and cooled over and over, the gas changes its physical state to form a liquid. If the compressing and cooling process is allowed to continue, the liquid will change physical state again from a liquid to a solid. This is because air is a compound of two primary gases, oxygen and nitrogen, each of which turn into a liquid at a different temperature. The temperature of air when both gases changes into a liquid is -320°F (-195.5C.) After air is converted from a gas to a liquid, the oxygen is separated from the nitrogen by a process of fractional distillation. This process allows the FIGURE 2 Hospital liquid oxygen converter with backup converter. (photo D. Davolt) liquid to warm which enables with the liquefied gas (that has lower boiling point (oxygen at -297°F)) to change from a liquid to back into a pure gas. The resultant oxygen is separated out, the process of compression and cooling is repeated until the gas is changed back to a liquid. Liquid oxygen has to be kept at temperatures lower than -297°F (-183C). The only way to maintain the extremely low temperatures required too keep oxygen in a liquid state, is to put the oxygen in a container that is essentially a large thermos bottle. Despite using a vacuum for insulation between the doubled wall container, it is physically impossible keep the temperature of the liquid from rising. When liquid oxygen warms to - 279°F, the liquid begins to convert back to a gas. Keeping in mind, the compression process that caused oxygen to change from a gas to a liquid, one liter of liquid now converts back to 862 liters of gas.

The conversion of the liquid to a gas inside a closed container results in an increase of gas pressure in the container. (Gay-Lussac’s Gas Law: if the volume remains constant, the pressure of a gas varies directly with the temperature.) If the gas is not used, and the pressure is allowed to build, the internal pressure will eventually reach the maximum design pressure of the vessel. To prevent the container from rupturing, there is a primary and a secondary pressure relief valves on the system to control internal tank pressure. There
are two primary relief valves to control excess pressure in the converter. These valves will re-seat once the pressure is reduced back to maximum working pressure. If the primary valves cannot stop the pressure build-up in the converter, the secondary valve will open. The secondary valve is a frangible valve (which means once the valve opens it does not re-seat.) The secondary relief is to prevent a catastrophic over pressure of the container.

Oxygen in liquid form is very useful for high demand users, such as hospitals or facilities that operate monoplace chambers. However, due to the physics involved, bulk oxygen converters are not suited as a long-term backup emergency gas system. Although hospital liquid oxygen systems are required to have a smaller secondary liquid oxygen converter as a backup for the primary converter, there is also a bottle gas backup system in case of complete failure of the liquid oxygen system.

When there is a demand on the oxygen converter for gas, the gas first leaves the converter and passes through the evaporator. The 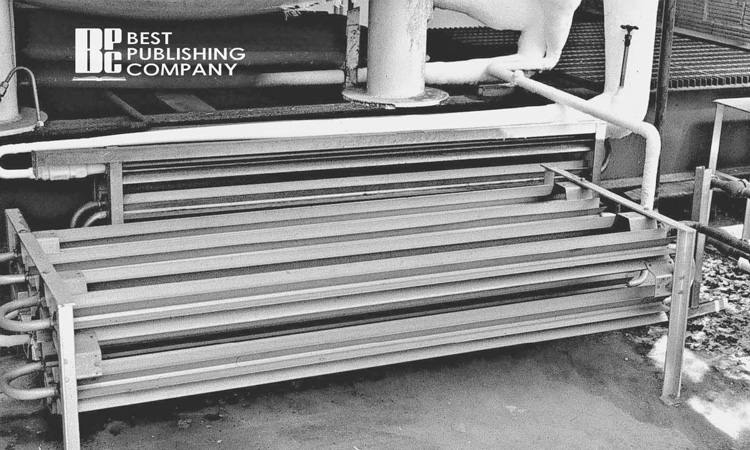 Evaporator for a liquid oxygen converterevaporator further warms the oxygen vapor and completes the physical change from a liquid to a gas. The outlet pressure of the gas is dependent on the working design pressure of the converter. The outlet pressure is higher than the pressure needed to operate clinical equipment (which includes the oxygen pressure required to operate a monoplace hyperbaric chamber). Shortly after leaving the evaporator, the gas passes through a line pressure regulator. The line pressure regulator is a redundant system with two parallel regulators that are plumbed with isolation valves to allow the replacement of a defective regulator without shutting down the system.
At this point, the line pressure is reduced to the maximum working pressure required to operate medical oxygen equipment. Hospital wall-mounted regulators operate in the pressure range of 50-55 psi. To reduce the oxygen line pressure to this range may present a problem when operating a monoplace hyperbaric chamber. Although monoplace chambers can operate over a pressure range of 50 to 70 psi, you need both a reasonable gas pressure and a high flow rate (32 standard cubic feet per minute) to effectively operate the chamber. The multiplace breathing gas system generally operates on pressures higher than 70 psi, since the regulators used inside a multiplace chamber need a higher inlet pressure to counter the chamber pressure. To provide the higher oxygen pressure required for hyperbaric operations, the oxygen delivery system is a plumbed up stream of the hospital’s reducing regulators, so higher pressures
of gas can be delivered to the hyperbaric chamber. In some instances, the hospital may install a separate oxygen converter for monoplace hyperbaric chambers.

Liquid Oxygen Safety Guidelines: things you should never do!

Liquid Oxygen Safety Guidelines: things you should always do!

Enter Your Name and Email Below to Get Resources and Tips for Advancing Your Career as a Hyperbaric Safety Director!

We invite you to consider enrolling in the course called, Introduction to the Role of Hyperbaric Safety Director. This 16-credit hour, live classroom course will give you a full orientation to the facility safety responsibilities and standards as defined by the NFPA, UHMS and other organizations.

Impact of the revised Novitas LCD Policies for Hyperbaric Medicine

[Free Webinar] Introduction to the Role of Hyperbaric Safety Director