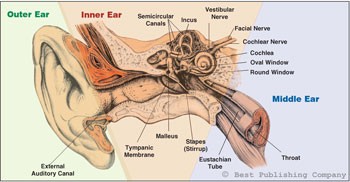 Sinus and internal and external ear disorders are the most common side effects of hyperbaric oxygen therapy (HBO2).1 These spaces are the cranium’s pneumatic sockets and, particularly those of the middle and inner ear, are most frequently involved in the pressure stress caused by compression and decompression maneuvers during exposure to altered pressures in the hyperbaric chamber. Barotrauma is the mechanical tissue damage produced by environmental pressure variation, and the middle ear is the most frequently involved structure in this kind of damage. According to Boyle’s law (the product of pressure and volume is a constant for a given mass of confined gas) it is easy to understand why all enclosed air cavities are more susceptible to this kind of lesion. Barotraumas can occur due to an increase or decrease of gas volume. To avoid gas volume decrease during the compression phase, the patient must perform some compensatory maneuvers aimed at inhaling and forcing gas (air or oxygen) into the nasal and sinus cavities. During decompression in the chamber or even underwater, the body’s gas expands and is expelled from cavities to the outside, usually without any active maneuver. It is essential to teach the patient about the functions of the hyperbaric chamber and the correct maneuvers of baro compensation. In this article, we will describe the main barotraumas that can occur during hyperbaric oxygen therapy.

In normal conditions, the caliber of the external auditory canal is sufficient to allow immediate pressure compensation. An EEB can only happen if the external auditory meatus is blocked by an obstacle, such as impacted earwax, external otitis, or ear plugs, during chamber compression. In this case during compression the obstacle prevents the equilibration between outside and inside pressure. During the compression phase there is a reduction of volume both in the plugged external ear and in the middle ear spaces. This leads to edema and petechial hemorrhages of the auditory tube, middle ear, and tympanic membrane. Rare complications include ear bleeding and tympanic perforation. Symptoms include acute pain, deafness, vertigo, nausea, and ear bleeding. The treatment therapy consists of antibiotics and topical steroids.

The most common side effect of hyperbaric oxygen therapy is middle ear barotrauma.2,3 MEB is more common during compression, while during decompression it is less likely to be reported. MEB during compression is a more pathological event and is related to a failed compensatory maneuver to relieve pressure between the middle ear and Eustachian tubes. The incidence of reported MEB varies between different hyperbaric centers from 5 to 66.7 percent.4,5 This difference is due to the heterogeneous population sample (intubated patients vs. spontaneous breathing patients) or to other causes.

Other common causes of MEB include the presence of diseases of the upper respiratory tract that generate obstructions of the Eustachian tube (e.g., infectious rhinitis and allergic and nonallergic rhinitis; ingestion of alcohol, which causes nasal congestion; large nasal polyps; large septal deviations; tobacco smoke; use of beta blockers and parasympathomimetic drugs; etc.) and incorrect or delayed compensation techniques. Depression of the middle ear tympanic membrane during the chamber compression begins to appear at a pressure of 1.2–1.3 atmospheres absolute (ATA) with reduction of the volume of endotympanic gas by 20-30 percent of the initial volume. There is a retraction of the tympanic membrane with pain, hyperemia, and edema of the ME mucosa that could lead to hemorrhage and cause the tympanic membrane to rupture. This generally produces a grade 1 or 2 MEB (according to the Teed classification) in more than 90 percent of patients; about 20 percent of patients with ear pain show tympanic membrane alterations short of perforation (MEB >grade 1). MEB is prevented in most patients by teaching autoinflation techniques or by use of tympanostomy tubes for those who cannot autoinflate their middle ear compartment. A prospective study in patients treated with hyperbaric oxygen therapy demonstrated that many patients develop serous otitis media during serial treatments. A history of Eustachian tube dysfunction predicted serous otitis media.6 Pseudoephedrine has been demonstrated to be effective in preventing barotitis media in a double-blind randomized controlled clinical trial in underwater divers.7 Conversely, topical nasal oxymetazoline hydrochloride was found to be ineffective in preventing middle ear barotrauma during HBO2.8

Sinus squeeze is the second most common in-chamber complication4 and usually occurs in patients with upper respiratory tract infections or allergic rhinitis. Usually a program of decongestant nasal spray, antihistamines, and/or steroid nasal spray just before compression allows the hyperbaric therapy to continue. Serious otitis has been reported in patients receiving hyperbaric oxygen therapy therapy.6 Although once thought to be due to reduced middle ear pressure by oxygen resorption, there is evidence to suggest that hyperbaric oxygen therapy might cause a reversible derangement in a middle ear chemoreceptor reflex arc that may regulate
middle ear aeration.9

WCHM is the world's only free online publication covering the topics of wound care, hyperbaric and undersea medicine. Find all past issues and subscribe for free today! Click Here for more details...

Winter Weather: A Barrier to Treatment

By accepting you will be accessing a service provided by a third-party external to https://woundeducationpartners.com/